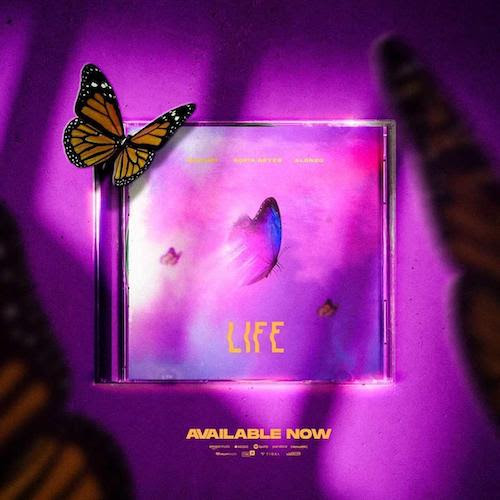 Maejor (AKA singer/songwriter and producer Brandon Green) is releasing more purposeful pop with his new single “LIFE” featuring Sofia Reyes and Alonzo. The song is premiering exclusively on V Magazine.

Maejor says, “I am excited to release this one-off single and honoured to be working with Sofia Reyes and Alonzo on it. I wanted this song to help us remember to appreciate our loved ones and to live life to the fullest because you never know when your time is up.”

Similar to his feel good debut album Vol 1: Frequency, Maejor keeps the positive vibes coming with “LIFE.” Known for his global collaborations, he teams up with Mexican pop star Sofia Reyes and French rapper Alonzo. The song’s message to keep your head up during difficult is delivered in English, Spanish, and French. Maejor works the ambient single around a sample of Dido‘s “Thank You,” that was famously sampled by Eminem on the hit “Stan.” Maejor continues to breathe new life into pop with this refreshing anthem.

Sofia says, “I’m so grateful to be a part of LIFE. It’s a song that inspired me so much. I feel peace and I believe the world needs more uplifting messages like this one. Teaming up with Maejor and Alonzo is a DREAM. And waaaait for the video!”

The accompanying music video will be released in the coming days.

Today, October 21st, Maejor will perform “LIFE” live for the first time exclusively on MelodyVR, as part of the music platform’s acclaimed Live from LA series. Fans can experience MAEJOR’s interactive performance at 6pm PT / 9pm ET / 2am + 1 day BST. The show will be available on demand immediately following the live broadcast, and will be free to view for 24 hours. Available on smartphones and VR headsets, the free MelodyVR app can be downloaded at on.melodyvr.com/App.

Maejor released his debut album Vol 1: Frequency in May. The album was inspired by using sound frequencies to help treat ailments including insomnia, anxiety, depression and Parkinson’s disease around the world. Maejor is the first pop artist to release music at a frequency of 432 HZtuning, which is considered a healing frequency.

Artist from around the world joined Maejor in his healing movement on the album, including rap star Juicy J on “Issues (432Hz),” rising hip-hop artist Lil Keed on “I Am Sorry (432Hz),” and Colombian pop star Greeicy on “I Love You (432Hz)“. That song has over 20M streams on Spotify, over 10M views on YouTube, and was certified Gold in France. Frequency has over 20M total streams across all digital streaming platforms.

Maejor was previously nominated for Grammy Awards for his work on Trey Song’z Passion, Pain & Pleasure, Justin Bieber’s Purpose, and Monica’s New Life albums. In addition, he is part of the Area 21 Duo and has written and produced songs for several artists such as Justin Bieber, Post Malone, Wiz Khalifa, Tiesto, Iggy Azalea, and Martin Garrix.

Sofia Reyes’ music has over one billion streams on Spotify. She recently released her single “Echalo Pa’Ca” after the hits “1,2,3” with Jason Derulo and De La Ghetto, and “R.I.P.” with Anitta and Rita Ora. Her YouTube channel also has over a billion views.