“An outsized ballad with the kind of soaring chorus that lingers in the listener’s bloodstream.”

“An incredibly easy-to-relate-to track and the pop style, sing-along vocals contribute to its fervor.”

Compelling and critically acclaimed singer-songwriter Ben Wylen is proud to release a new socially conscious single entitled “Skinny Jeans.” In the midst of a pivotal moment of social unrest, Wylen has courageously spoken out against injustice in no uncertain terms. His propensity for thought-provoking and politically charged storytelling is filling the void echoed through other contemporary voices like Sam Fender, H.E.R. and grandson. Wylen uses his expressive voice to cover a wide range of political issues including gun violence, police brutality, and climate change. 100% of the revenue from streams and downloads will be donated to the youth climate clarity, Sunrise Movement.

Ben says, “Everyday when I read the news it seems like another innocent person has been killed as a result of police brutality or a mass shooting. Politicians are great at talking about these things but nothing ever gets done about them. I can’t help but think that it is sad that the youth of my generation still has to march in the streets over issues that our parents were fighting for 50 plus years ago. The silver lining is that today’s young people are resilient and this song speaks to that.”

“Skinny Jeans” is a song that underscores the need for change and so its release during such a historic moment is timely. It is released along with a music video and a campaign partnering with the Sunrise Movement. Wylen hopes the song will help spread awareness to his fans and make a positive impact during this divisive time. The video is directed by Olly Starkey, who has also created politically driven visuals for U2’s stadium tours. The “Skinny Jeans” video uses moving footage from the Sunrise Movement, Extinction Rebellion, and the courageous front line protestors highlighting the collective desire for change. Through this video, Wylen hopes to inspire others to take action and get involved in the fight against injustice. As Ben says at the end of the song, “Don’t Grow Older, Wishing You’d Said Your Piece.” 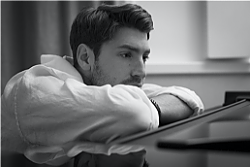