New Single “IDK” Is Out Now

Finn Matthews is thrilled to release his new single “IDK” that is out now and featured exclusively on Hollywood Life.

Finn says, “This song came from an experience I had where I realized that doing what I want to do is the most important thing in my life. I no longer felt the need to impress anybody or give anything to anybody who I didn’t feel deserved it. It’s really important to be secure with yourself and to not get sucked into drama”

Finn has been unstoppable this year, having released 3 records thus far with more to come before 2020 ends, and he is featured on Rick Ross new single “Pinned To The Crossed.” His current record, “Low Key” has been featured on playlists like “Spotify’s Pop Chill Out” and “Fresh Finds: Pop,” just to name a few.

“IDK” is out now at  https://ffm.to/finnmatthewsidk 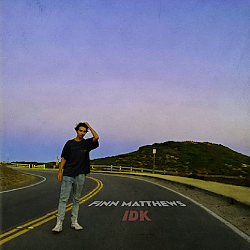 FINN MATTHEWS New Single “Clouds” Is Out Now; Featured on Under The Radar Magazine

FINN MATTHEWS New Single “Clouds” Is Out Now; Featured on Under The Radar Magazine

FINN MATTHEWS New Single “Closing In” Is Out Now; Featured on Popular TV