Personally, I’ve only been to a One Direction concert and it went down like this. The day of my One Direction concert, I arrived at the Rose Bowl in Pasadena and parked on the grass with the rest of the cars. First, I had to buy my concert merchandise, then enter the gates and there is food to buy, and live music playing.

I got floor tickets, so before I got to go inside, I got a wrist band and found my seat. One Direction’s Where We Are intro begins playing as people start rising. After about two minutes, the stage opens up and One Direction appears singing Midnight Memories. 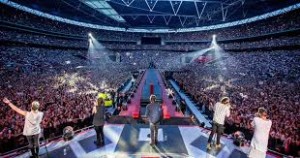 The crowd erupts with cheers and everyone is screaming so loud that you can’t even hear yourself anymore. The boys interact with the crowd a little bit. Zayn waves at the crowd (when Zayn was still apart of 1D), Harry eats a banana and spits water, Niall does THE crotch grab during “Better Than Words”, Liam asks the fans how we’re feeling, and Louis says, “Absolutely incredible.”

Streamers come flying down and we’re all one big family gathered to see One Direction. Nothing, but good times and good vibes. One Direction completed their Where We Are Tour as the highest-grossing tour of all time by a vocal group.

Now, I’ve never been to a Justin Bieber concert, but I’m sure it’s just as great. Justin just got done with the U.S part of his tour, and a lot of people that I know got to go and see him.

I have heard from multiple sources that Justin is very connected with his fans during concerts. Until I go and actually experience Justin for myself, I will never actually know what the feeling of being at a Justin Bieber concert is like.

I imagine a lot of routine dances, and girls crying everywhere, just like at a One Direction concert. I can just imagine the angelic voice of him singing acoustic.

I’m a Directioner and have been for quite some time, and I wasn’t too sure about Justin when I first heard about him. He apologized for all of his reckless behavior and his album was one of the best I have ever heard in my life. I am definitely a Justin fan. I can’t decide who’s concert is better until I experience Justin.

I love the fact that when Directioners are going through something sad, or we’re all having a meltdown, Beliebers step in and help us in our time of need.

So, Directioners, and Beliebers, tell me whose concert is better: One Direction, or Justin Bieber? The choice is yours.