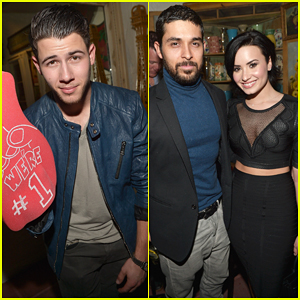 Nick Jonas happily rocks a foam hand as he poses for a photograph while celebrating the success of his hit single “Jealous” at The Ivy on Tuesday (January 20) in Los Angeles.

The 22-year-old entertainer was joined by his older brother Joe, Demi Lovato and her boyfriend Wilmer Valderrama, Hailee Steinfeld,Kaitlyn Dever, Adrian Grenier,Madison Beer, and Casper Smart as they all came out to show their support.

“Hearing CHAINS on the radio for the first time while on my way to celebrate JEALOUS at #1,” Nick captioned along with a video on his Instagram.