It wouldn’t be a One Direction concert without Harry Styles falling off stage, having something banana-shaped hit him in his crown jewels or just generally being the beautiful, funny, curly-haired man we love. Seriously, we wouldn’t have him any other way, so when we saw he’d announced his pregnancy during the lads’ first On The Road Again show in Sydney, we were hardly surprised.

Well, we WERE surprised, considering a) it’s tres impossible for men to actually *get* pregnant and b) we’re 150% sure he’s not *actually* with child, but y’know. Maybe. ANYWAY.

Yes, here’s the glorious moment that Harry announced he was nursing a teeny Harold in his belleh. What a beautiful image a mini-Harry is. Ahem.

So that’s Hazza and Nialler knocked up now? Okay good.

When we finally got over the pure and utter joy we felt at watching Harold being a wonderful human being (jk, we’ll never get over any of these clips), we started wondering who the heck the father could be?

Of course, the number one option and the person Twitter immediately was the dad-to-be is Louis Tomlinson, for obvious reasons. But what if Harry travelled a little further a field? 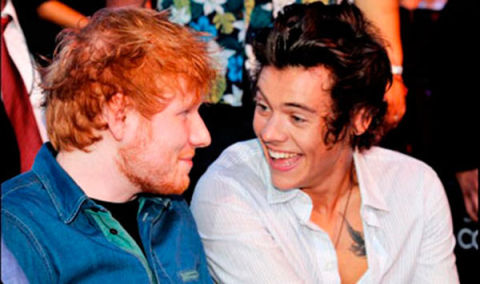 Has BFF Ed Sheeran been making gorgeously ginger, curly-haired children with Harold? Perhaps Josh Devine banging his skins (DRUM SKINS YA PERVS) has caused an impregnantion, or what about Chris Martin playing the ivories? How about Zach Braff, because him and Haz are awfully close, non?

We’re not entirely sure where we’re actually going with this (and we WOULD suggest we’d got him pregnant but it’s kinda impossible and a bit odd), but CONGRATS HARRY. Bagsy godparents.

The tour adrenaline also got to Hazza in different ways too, as him, his glorious man bun and his shiny golden boots took a little tumble on stage. Bless his little cotton socks.

Need anyone to kiss it better, Harreh? HINT HINT.

Sidenote: Can we just take a minute to appreciate Nialler’s run? Jus’ ’cause.

Also, just in case your life isn’t ruined enough yet, this happened:

Thank you baby Jesus, we’re officially DONE. And it’s only the first bloody day of the tour.

We’re going to be quivering wrecks after this, aren’t we. SIGH.

What do you make of Hazza’s confession then? Reckon he’s having a boy or girl? (LOLZ). Send us your suggestions to @sugarscape. THANKS.

HAZZA IS TRULY AMAZING ISN’T HE!!!